Sweetness in the Lord in the mists of much toil 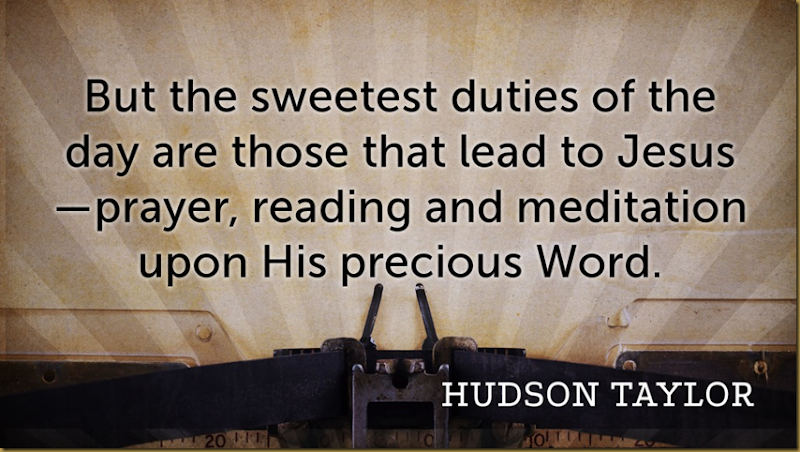 In addition to working hard at Chinese this summer he was diligently keeping up other studies, medicine and chemistry especially, that he might not lose the benefit of his hospital course. The classics he gave as much time to as possible, and he seems always to have had some useful book on hand dealing with history, biography, or natural science. The following is a typical entry in a journal-letter to his sister:

Before breakfast read Medicine, then Chinese nearly seven hours. After dinner, Greek and Latin exercises, each an hour. After poring over these things till one can scarcely see, it is a comfort to have a fine, clear, large-type Bible, such as Aunt Hardey gave me. It is quite a luxury. Well, all these studies are necessary. Some of them, the classical languages of Europe, ought to have been mastered long ago; so it is now or never with me. But the sweetest duties of the day are those that lead to Jesus—prayer, reading and meditation upon His precious Word.

Summer was now upon them—those hottest months of the year when one lives in a perpetual Turkish bath, and mosquitoes, prickly-heat, and sleeplessness have to be reckoned with, as well as a temperature that for weeks together scarcely falls below 80° F. at night. It is easy to write about it, but who that has not lived through such days and nights can imagine how much grace it takes to bear the discomfort and distress without irritability, and keep on steadily with work when all one’s courage seems needed just to endure.
All through this trying season, however, Hudson Taylor kept up his studies, never falling below his average of five hours at Chinese every day. Once or twice he went into the country with Mr. Burdon, risky as it was to attempt it.

“These are troublous times,” he wrote, “but we must do something.”

And their faith that the Lord would help them was rewarded by the welcome met with from the village people, who were only too glad to see them out again.

“I think I may say I have one friend now,” he added, telling of a happy evening with Mr. and Mrs. Burdon after one such excursion. “But I do not want to go over there too often, as I am only one of his circle and he has a wife for company. I feel the want of a companion very much. The day is spent with my teacher, but my evenings generally alone in writing or study.”