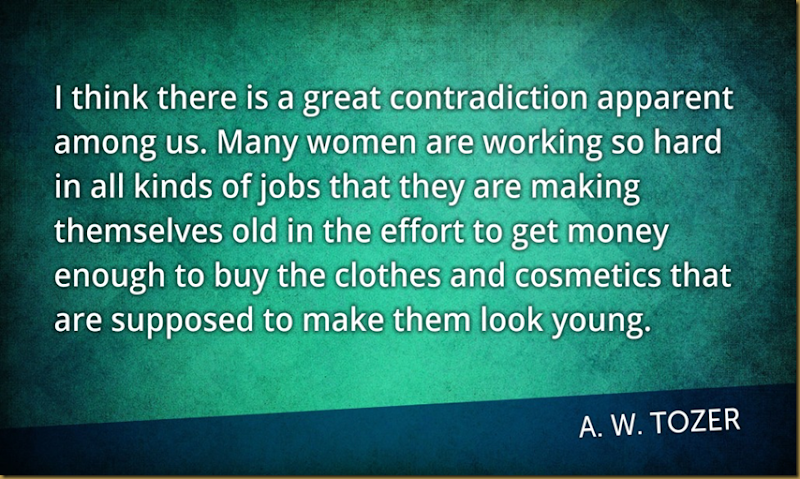 This brought a smile to my face today.

Now, there has to be some sort of outward adorning and I would summarize it in four familiar words: clean, neat, modest, appropriate.
None can say that they do not understand the word clean. However poor we may be, we may still be clean. Nearly everyone has enough water available for basic cleanliness.
Why can’t we all be neat in our daily contacts? I do not think anyone ever needs to look as though he had gone through a cyclone and had no time since to get “accumulated.”
In our day, some folks seem to think the word modest is a comical word. You can laugh it off if you want to, but it is one of the words that we will face in that great day of coming judgment.
In our Christian lives, we should know the strength of the word appropriate. I think every Christian woman should dress appropriately, properly and suitably to her circumstances and to her income. A Christian woman who tries to give out tracts dressed in loud, flashy apparel or in dirty and disheveled garb will be a poor advertisement for the gospel she is trying to publicly proclaim.
I realize that some women excuse their manner of dress in public by the fact that they have so little money to spend for clothing.
I contend that a woman still doesn’t have to be grotesque in her garb even though she must wrestle with the problems of small income.
You know that I ride the public buses occasionally and for the small price of the fare it is a wonderful place to observe human nature.
When I see some of the inappropriate and grotesque things worn by women boarding the buses I have wondered why others in the family did not protest: “Please, Mama, don’t go out like that! People will think you have escaped.”
I think that there is a great contradiction apparent among us. Many women are working so hard in all kinds of jobs that they are making themselves old in the effort to get money enough to buy the clothes and cosmetics that are supposed to make them look young.
As far as I am concerned, it does not reflect any credit on the common sense or spirituality of any woman who knowingly goes beyond her financial bracket to decorate herself for the sake of appearance!