I listened to this as I was cleaning the Post Office this morning and really was impacted by this quote. 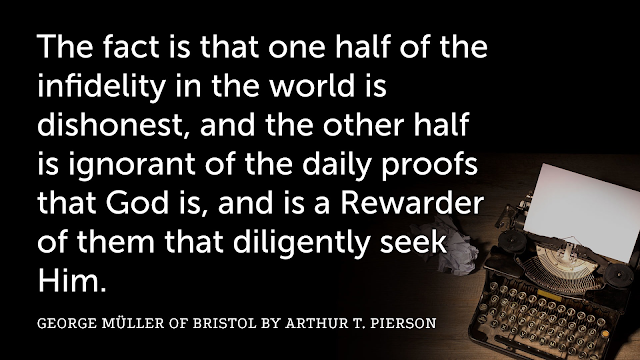 In September, 1882, another donor describes himself as “simply astounded at the blessed results of prayer and faith,” and many others have found this brief narrative “the most wonderful and complete refutation of skepticism it had ever been their lot to meet with”—an array of facts constituting the most undeniable “evidences of Christianity.” There are abundant instances of the power exerted by Mr. Müller’s testimony, as when a woman who had been an infidel, writes him that he was “the first person by whose example she learned that there are some men who live by faith,” and that for this reason she had willed to him all that she possessed.

Another reader found these Reports “more faith-strengthening and soul-refreshing than many a sermon,” particularly so after just wading through the mire of a speech of a French infidel who boldly affirmed that of all of the millions of prayers uttered every day, not one is answered. We should like to have any candid skeptic confronted with Mr. Müller’s unvarnished story of a life of faith, and see how he would on any principle of ‘compound probability’ and ‘accidental coincidences,’ account for the tens of thousands of answers to believing prayer! The fact is that one half of the infidelity in the world is dishonest, and the other half is ignorant of the daily proofs that God is, and is a Rewarder of them that diligently seek Him.

From almost the first publication of his Narrative, Mr. Müller had felt a conviction that it wag thus to be greatly owned of God as a witness to His faithfulness; and, as early as 1842, it was laid on his heart to send a copy of his Annual Report gratuitously to every Christian minister of the land, which the Lord helped him to do, his aim being not to get money or even awaken interest in the work, but rather to stimulate faith and quicken prayer.*

It’s hard to believe that the New Year is already here. As we look over the year it is amazing to see what God has done.  We started the year by adding a book club to our weekly events and although the event has changed from the original concept, several people have been reading quality Christian books that are stirring faith. We also started to record our sermons and post them online. Although I personally don’t feel like my preaching is worth hearing again we have had people listening from all over the United States, United Kingdom, Canada, Bahamas, Singapore, and more. In fact in the last year 24 different countries have listened to the preaching and teaching from our little church. It serves as a reminder that we don’t always know or see the impact of what we are doing.
Some of the highlights from 2015 that I remember were the visit from Pastor Ron VanderHart who I sat under for many years growing up. Truly the longer I am in the ministry the more I see how his ministry has shaped mine more than anyone else’s.  Another highlight from the year was my opportunity to preach at Camp Grace for a week of junior camp. I had forgotten how much fun it could be to preach to juniors! I was also privileged to baptize a young teen from our church that trusted the Lord for salvation at camp. Not long after the camping season we had our first full week of evangelistic meetings since I have been here. Although there were many things going on that week it was neat to see God at work in the lives of many individuals.

As a family we have made it a habit to visit the Midwest every other year for Christmas. This year we did the same and enjoyed spending time in Minnesota and in Iowa. We were encouraged also to see the church families who have been praying for us and supporting us.