Our lives have been very busy this summer and unfortunately I realized that I have forgotten to do ministry updates to keep everyone informed.

March began with a bang. With a new baby we headed to Englewood, Co for the Dennis Brown Memorial Home Missions Conference. We were encouraged being around other pastors and church planters and received a lot of good preaching. 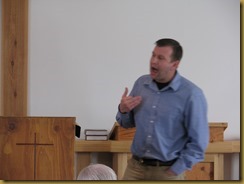 I spent a large amount of time in March preparing for the youth rally and things went very well. Evangelist Mike Fisher came and preached after the teens were quizzed over Hebrews 7. We had 88 chairs in the building and people were still standing around so I think it is safe to assume we had more than 90 people in attendance. Several teens made decisions of surrender and afterwards they hit the streets for a photo scavenger hunt.

It wasn’t long after the teen activity that another event was on our plate. Charlie Oliver passed away. His wife LaQuetta Oliver who has been a faithful and active church member spent several weeks helping her failing husband until he passed away on April 10th. The funeral was held on April 16th and the family asked me to officiate the service with Bill Walker, who is an old family friend. I was privileged to preach a simple gospel message to many family and friends who would never enter a church building.

We were compelled to take a last minute trip to Minnesota to help my Father-in-Law get his fields planted. He has hurt his back and needed help. Unfortunately, rain didn’t let us get to much done but it was good to be able to see family again. While I was there I received some phone calls from an family who was interested in coming to our church. They had many questions and we hope to see them soon. On our way home we stopped to see Mt. Rushmore and let the kids do some exploring. 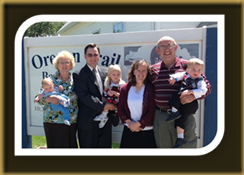 Pastor Ron VanderHart, the pastor I grew up under, stopped in for a visit with his wife Donna on their way to Yellowstone National Park. They rolled in just in time for our Church service and I asked him to preach for us. He preached a very powerful sermon from Mark 4:35–41 on trials and trouble that we face. After the service they scooted on to Yellowstone so they could check in before their reservation was canceled. It was good to see them again and we made sure we got a picture with them before they left. 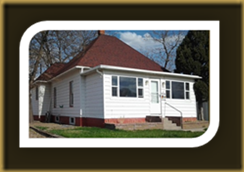 Just before leaving for Minnesota we looked at another house that was for sale. We weren’t sure if it would work out or not but in many ways it was perfect. It was close to the church, 3 bedrooms, had a fenced in yard for the kids, and even a garage. After returning we closed on the house on June 13th and have been in a flurry of projects since. 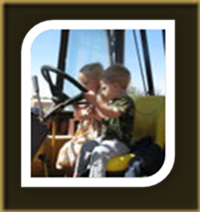 On Wednesday before buying the house Sam, our neighbor next to the church, told me that there was a backhoe coming on Friday to clean out some debris between the church property and his. I can remember thinking how there was no way if we bought the house on Thursday I would have enough time to help with this project, prepare for Sunday, clean the house, and begin moving all within 2-3 days. 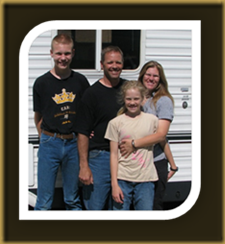 As we finished up the backhoe project on Friday morning I was approached by Dave Corneliussen. He asked me if there was anything his family could do to help us. I had never met him before and didn’t know him. He had parked across the street with his camper and told me that he had heard about us and was coming through the area helping out small churches. It wasn’t long before we struck up a bond and the whole family Dave, Chris, Even, and Savannah all jumped in helping us move and get many projects done around the church.

I can’t honestly say that I prayed for the Lord’s help for the weekend, but He answered my prayer before it was uttered. Lee and Cindy Griebe and Leroy Clark were planning on coming over on Friday to help clean the house so with many hands the work was made light. We are mostly moved in and about ready for our missions conference. With the Corneliussen family here to help we were even able to get some new laminate flooring in the dining room where the white carpet had been torn up by the previous renter’s dog. We owe a big thank you to the Corneliussen family and are praising God for his provision of much needed help. 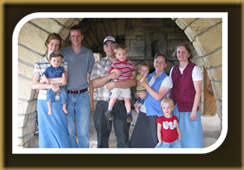 Just after we finished moving it was time for our missions conference. Many people came from other churches to take part and it was encouraging listening to Pastor Marlin Driskell and Missionary Nathan Roberts preach. After the conference our church voted to take on the missionaries who came as well as the Corneliussen family who are helping small churches. Our people wanted to do this and it was exciting to see it happen.

To view/download our monthly updates please use the link below.